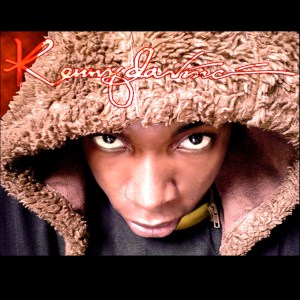 If you see this dude moving gently with his walking stick or crutches, you will think he is “physically challenged” but you will be so wrong after meeting him. Real name Ekene Ngige a.k.a Kenny Da Vinci is a load of talent looking for the next angle to explore.

He told us about his music beginning in secondary school – Federal Government College, when Mo’hits producer, Don jazzy would trade freestyle with him and some of his friends during their leisure time. The same school produced other artistes like Wande Coal, Eva, Teeto and O.C the young Nollywood actor.

He later joined a friend called Caleb to form a group called ‘WORD 2 WORD’ and they went from one Church to the other, serenading them with their unique style of music. They eventually broke up after Caleb gained admission far from Lagos.

Kenny continued alone to become one of the finalist in the Brothers With Voices/Sisters With Voices MUSICAL TALENT HUNT organized by Kenny Saint Brown in 2005. He was a guest artiste in the CITY PEOPLE AWARDS organized specially for Keke and D1 that same year. After a couple of performances here and there, he decided to lay low in order to focus on his education.

Talking about being multi-talented, Kenny Da Vinci, who curbed his moniker from the legendary artist, Leonardo Da Vinci is also a fine artist. He got an award as the best artist in his secondary school days. Today, the graduate of Fine Arts (Yabatech) is Hip on TV’s graphic editor, handling several projects including visuals for Hip Hop World Awards.

Kenny Da Vinci is presently promoting his first official single titled “ITS ALL GOOD”…it’s here at the Jarmzone…you can play and leave your comments. You can also download by following the link http://www.box.net/shared/bnfpxo2ptr. His full album is expected to drop in the first quarter of 2011.

Just Incase You're Wondering Why Timaya Is Threatening To Beat Ubi Franklin... Remember the accident where Timaya was called out...

Will Smith and Chris Rock You know this conversation will not fade off like that. Matter of fact, Twitter is...

Actor, Will Smith smacked comedian, Chris Rock on Oscars Live stage. The slap landed after the comedian shared a joke...