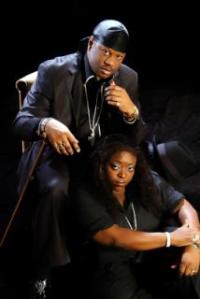 "We are too legit to quit" Wunmi Obe told news men with a bold, assuring look early this week at an exclusive event to

announce the release of their quintet album.

And like she guarantees, the album "T.W.O Legit" stands as evidence. Produced by ID Cabasa, Puffy T, Abel Davey, Rymzo, Sean Keyz and Foster Zeeno, the LP takes us on a journey of dance tracks, thanksgiving songs and family friendly songs.

"The album was conceived during the time it was rumored that we had quit music for TV, we even recorded a song to that effect" Tunde Obe says.

"We are definitely in this for good, and as we keep saying, we are too

A new video "T.W.O Legit" and sneak previews of the next video

"Believe in me" was also premiered earlier this week.

Tunde and Wunmi Obe started as lead singers in a campus band 'Turning point' in the 80's but got popular Nationwide with their popular weekly television slots on the Charley boy show and Zoom time.

In 2009, the Entertainment industry went agog with the news that the couple were returning to TV, one thing they were known for in the 90s, but they were quick to reassure fans they were not in any way considering quitting music. They quickly returned with "Zombie", a single that enjoyed massive airplay on radio and TV stations across the country.

The Obes stretched the limits in their last album; producing major hits like "Mogbomoya", "Adupe" and "Like A Fool" but the new album brings a lot more to the table. With songs like "Get This Party Started", "T.W.O Legit", "Forms" and already established songs like "Fine Bara" and "Zombie" fans will have a lot of humor-soaked messages to take away.

"It is nothing like you have seen before, it is the best album we have ever done, and we hope the fans will connect with the music" Tunde assured.

“EDUCATION IS NOT FOR ME” – TIMAYA

July 18, 2018
Searching for the forgotten heroes of World War Two

Searching for the forgotten heroes of World War Two

July 18, 2018
The man who saved thousands of people from Covid

The man who saved thousands of people from Covid

July 18, 2018
All you need to know about penalty shootouts

All you need to know about penalty shootouts

You may have missed